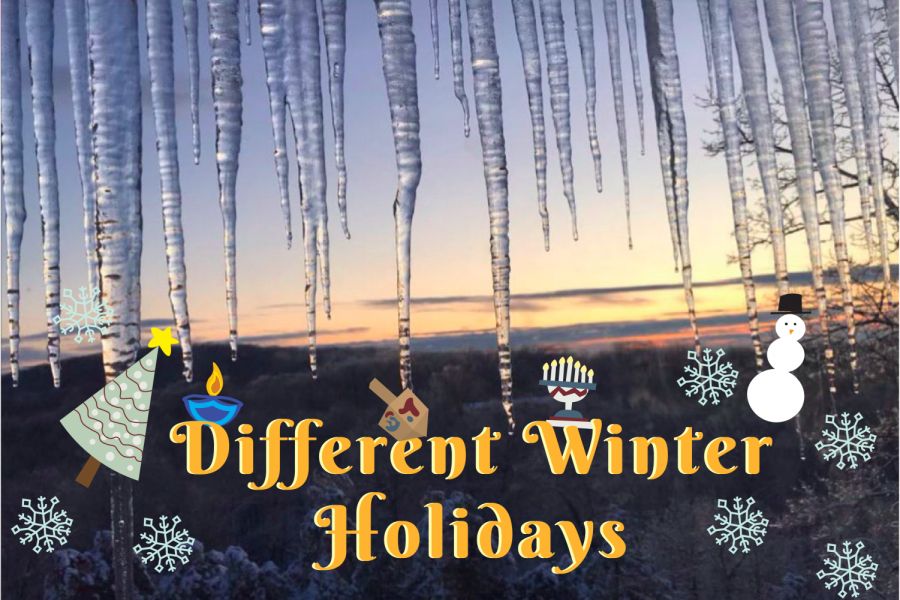 There are dozens of holidays celebrated during Winter, all with their own unique origins and customs.

Christmas, Hanukkah, and New Year’s are all winter celebrations that many people know of and that are talked about the most. However, sometimes we can forget that there are other holidays during winter than just these three celebrations. After all, there’s a multitude of religions across the nation, let alone the world, each with their own celebrations. And, the beauty of America is that it is a melting pot of cultures, religions, and ethnic groups from every corner of the world. As such, gaining knowledge about these different celebrations and understanding them is integral to understanding other cultures, including cultures that are also in the United States.

Occurring on Dec. 21 in 2020, the winter solstice is when Earth’s poles experience the maximum tilt from the Sun, causing this day to be the shortest day of the year. In fact, Murmansk, a city in the northwest portion of Russia, doesn’t even have a day during the winter solstice, and Bodø, a town in Norway, only receives around 49 minutes during this day, with the Sun then disappearing and turning the day to night. Furthermore, celebrations and festivals occur in many parts of the world, such as the Dongzhi Festival in East Asia as well as certain holidays that are only celebrated on the day of the winter solstice, such as Blue Christmas, a Western Christian holiday, and Yalda, an Iranian holiday.

Celebrated on Dec. 25, this Christian holiday is one of the most celebrated and known winter holidays around the world, with around two billion people observing this holiday yearly. Commemorating the birth of Jesus Christ, this holiday’s celebrations include putting up and decorating a Christmas tree, gift-giving, church attendance, music and carols, decorations, food, and more. In addition, religious ceremonies such as Advent, Los Posadas, Epiphany, and Christingles have been adopted around the world to add to their Christmas celebrations.

This Jewish holiday, also known as the Festival of Lights, celebrates the rededication of the Second Temple in Jerusalem in the 160s BC and marked religious freedom for Jews. For eight nights, Jews celebrate Hanukkah by lighting a candle on a menorah, eating foods such as latkes and sufganiyot, playing dreidel, and more. Blessings over the candles are also common, such as the Shehecheyanu blessing, recited on the first night, and the Hanerot Halalu, a hymn recited after the candles are lit.

Following the end of the 12 days of Christmas, Three Kings Day, also called Epiphany, is celebrated to commemorate the day the Magi, or the Three Kings, visited the baby Jesus Christ. However, this holiday doesn’t have a set tradition, as the festivities and ways to celebrate are markedly different across the world. For example, in Argentina, Paraguay, and Uruguay, children leave their best shoes outside along with water and grass, hay, apples, or carrots for the horses (sometimes camels or elephants as well). When they wake up, there are small gifts left by the Reyes (Spanish for “kings”). However, in North Macedonia, this holiday is celebrated through festivities that include a priest throwing a wooden cross into the water, with men then jumping into the water to retrieve the cross. Whoever retrieves the cross is said to be blessed for the year.

Created in 1966 following the Watts riots, this holiday, celebrated on Dec. 26 to Jan. 1, was started by African American professor, Maulana Karenga, to “give Blacks an alternative to the existing holiday and give Blacks an opportunity to celebrate themselves and their history, rather than simply imitate the practice of the dominant society.” Festivities include gift-giving, a feast of faith called Karamu Ya Imani, decorating their home with fruits and vegetables, and lighting a kinara, a type of candle holder. Furthermore, throughout the festivities, the seven principles of Kwanzaa are celebrated. These principles include Umoja (unity), Kujichagulia (self-determination), Ujima (collective work and responsibility), Ujamaa (cooperative economics), Nia (purpose), Kuumba (creativity), and Imani (faith).

One of the most important Chinese holidays, Chinese New Year celebrates the start of the new year on the traditional Chinese calendar. Traditions and festivities during this holiday include passing out red envelopes filled with money, gift exchange, large-scale festivals that include lion dancing, markets, fireworks, music, giving symbolic flowers, dressing in traditional Chinese clothing, and more. Also, depending on the day of the New Year, different meanings and festivities are held. For example, the first day of the Chinese New Year symbolizes the welcoming of the deities of heaven and earth. Traditions during this first day include lighting fireworks, burning bamboo sticks, and visiting family. However, the fifteen day of the Chinese New Year includes the Yuanxiao Festival, also known as the Lantern Festival. Traditionally, tangyuan rice dumplings are eaten, candles are lit outside houses, and families carrying a lantern roam the streets.