Primary Elections for Governor: Who Are the Candidates and What Are Their Policies?

Many candidates are running for public office this election with different policies and agendas they hope to fulfill. 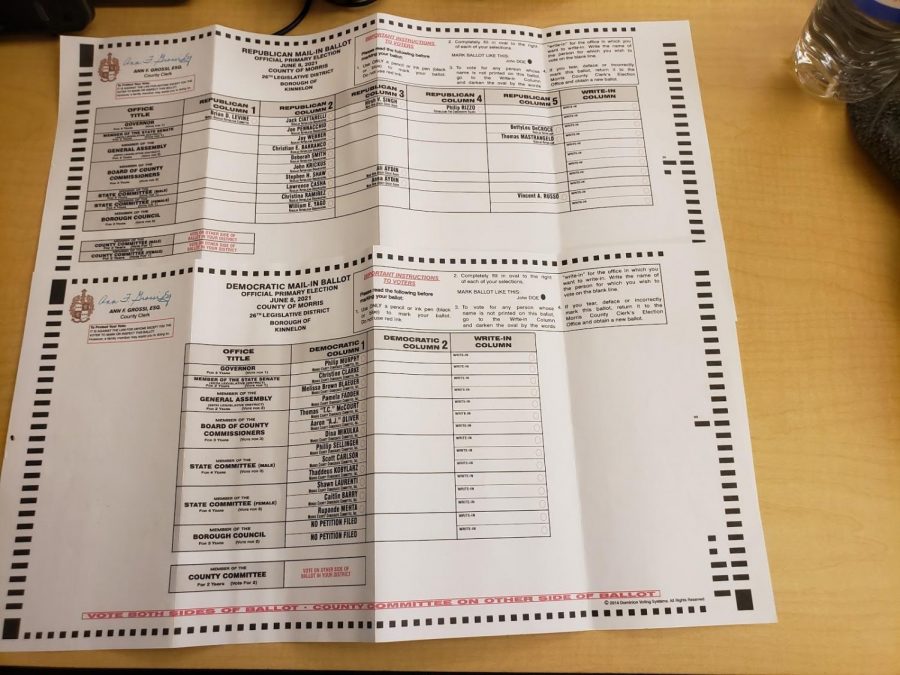 The 2021 Primary Democratic and Republican ballot.

Every four years new candidates come out of the woodwork and line up for the chance to fill a desired position in public office. After the controversial presidential election this past year it is now time to fill in state and local posts. This year, on June 8, 2021, New Jersey will hold its primary election and the headline in the show is governor.

This year Gov. Phil Murphy will be the incumbent governor (the person currently holding office and re-running for the position they currently hold) of New Jersey and just like he did four years ago run under the Morris County Democratic Committee. Governor Murphy took office on January 6, 2018; five years after coming back from his four-year tenure as ambassador to Germany during President Barack Obama’s first term in the oval office.

During his administration, Murphy has signed many bills supporting students, LGBTQ+ citizens and has spent the last year and a half focusing on raising the minimum wage and helping to curb the effects of the ongoing pandemic and the recession that has followed it while using his campaign slogan “Stronger. Fairer. Forward.”

On the opposite end of the spectrum, there are currently four candidates for the GOP  (Grand Old Party or Republican), which will be narrowed down to one this June. The victor of the primaries will be running against Gov. Murphy in the general election on Nov. 2, 2021.

The first of the four candidates running for Republican governor is Brian D. Levine. Levine is currently a CPA (Certified Public Accountant) and was previously a council member in Franklin Township, NJ for five years and mayor of Franklin for over 10 before graduating to the position of Somerset county freeholder. He ran for governor for the first time in 2009 but lost to Jon Corzine.

Levine is running under the Morris Regular Republican Committee and has touched on many subjects he believes are of great importance including the pandemic. “Closed small businesses are in dire straits, domestic violence is up, mental health services are required. As for state agencies, the workers are great, but DMV leaves people frustrated,” Levine told the New Jersey Globe.

His main concern however is the economy. Levine said, ‘New Jersey is Broke” and that he wanted “civil discourse” with the other candidates and that he wanted solutions to the problems, and he wanted ideas to be discussed in order to open stores during the pandemic.

In addition to Levine, Jack Ciattarelli is also running for Governor. He is running under the Regular Republican Organization. Ciattarelli, similarly to Levine, is a business owner and is planning to reopen New Jersey despite the ongoing pandemic. Ciattarelli blames the shutdown enforced by Murphy as the reason for the hurting economy. “One in three small businesses shuttered their doors, rising property taxes are forcing people to flee, and the governor’s arbitrary lockdowns are crushing the state’s small businesses.” Ciattarelli said in a press release.

After two impeachment hearings and alleged involvement in the attack on the Capitol Building, there are still many supporters of former President Donald Trump. One of them is candidate Hirsh V. Singh. Singh is running under the slogans “Make New Jersey Great Again” and “God, guns, Trump: The three things that keep us free.” two campaign slogans directly inspired by the former President. Singh attended the New Jersey Institute of Technology and is also a businessman. Singh intends to sue Gov. Murphy for issuing a vote by mail order during the 2020 presidential election which allowed citizens to vote from their homes and send in their ballots by mail. Despite his petition, Singh is unable to fight Murphy in court and was denied a writ of certiorari (issued by a superior court to direct that the record of the lower court be sent to the superior court for review). Singh is continuing to fight the election results of the 2020 presidential election and is carrying on with his petition to recall all votes from New Jersey Residents during the election.

The fourth Republican candidate is Phillip Rizzo. He is running under Republicans For Conservative Values. Rizzo has dedicated his time and his platform to education reform, reopening New Jersey, and lowering taxes. “We need to take a hard look at our funding and make changes where dollars aren’t being used effectively or making it to the classrooms that need it most. Some schools and districts are un-equitably funded, failing our students. I’m also a believer in education freedom. New Jersey kids from north to south should have more opportunities available to them” Rizzo wrote on his website. In addition to changing the education system in New Jersey, he also plans on reopening small businesses and giving them the resources they need to continue to run during the pandemic.

The Primary Election will take place on June 8, 2021. Voters can register online to vote by mail or at a local in-person voting site such as the Kinnelon Public Library. It is important for people to vote for candidates both in the primary and in the general election. Make sure to get your vote out, and get your voice out by voting for candidates whom you support.