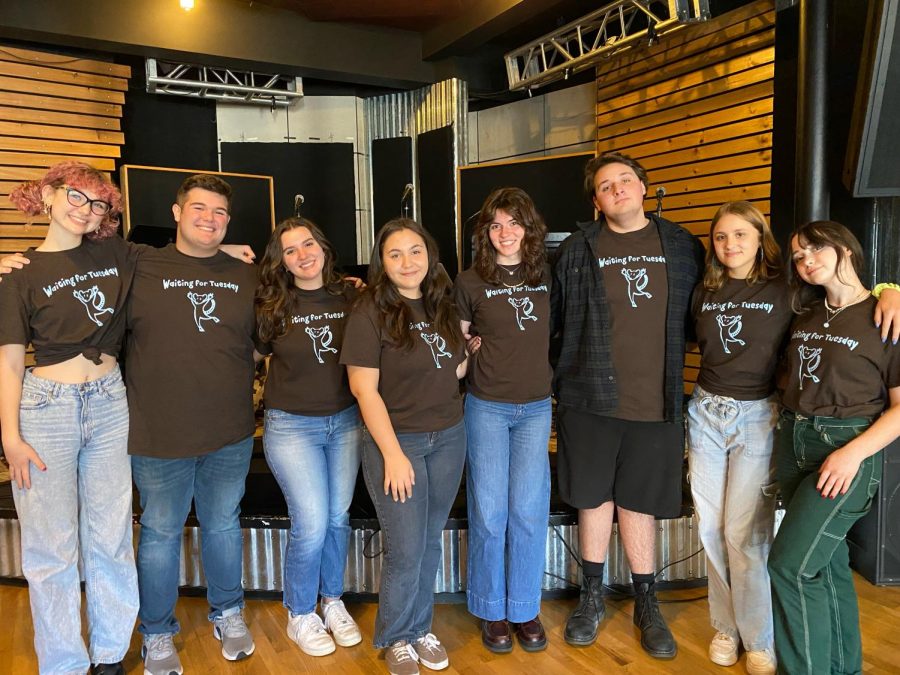 Cast of Waiting For Tuesday with writer, Katie Nieto, in the center

It was Nov. 6, the audience was getting ready to see Waiting for Tuesday, a musical created by senior Katie Nieto. Originally inspired by a Roald Dahl book, Nieto had never thought 7 years later that this simple idea would be her biggest project yet.

Nieto recounts how she felt in that moment, “Usually when you’re involved in a show you have a role. But opening night was crazy because I was kind of all the roles. So my head was in a bunch of different places but it also felt so good because I was looking at everyone around like this is mine, these are my words, they are saying something that I wrote. It was just a feeling like this is surreal, this is crazy.” The show that took place on Saturday was an industry reading, and with the right amount of funding, Nieto will be able to perform her show to the fullest.

But the most important part of making an idea into reality is the right people by your side. Nieto states, “I think the most important part about making something a production is having a team you can trust, and luckily I had been in a lot of shows [in] other places… and I just had a network of people that were super talented that I could go to, to make this a real project.”

Nieto also talks about her inspiration for her show, “…working in the theatre community.. I’ve always seen shows, I’ve done shows, and I knew I wanted to perform theatre for the rest of my life. But I also grew up in the rock environment, playing gigs with bands and doing stuff like that.”

Nieto shares her unique journey of acceptance, as she explains, “Lot of shows that I would see on Broadway.,. there were gay guys, but there weren’t really gay girls, especially those who struggled with coming out to themselves and to the world, and so I took it upon myself. I was like, ‘I want to create the kind of representation that I needed going through this.”

Waiting for Tuesday represents Nieto’s struggles and passions. The message she wants the audience to take from this, as she says, “Pride is a great thing. And pride is a lot of things. Pride is community, pride is celebration, but pride doesn’t exist without accepting yourself first, because it’s really hard to celebrate people without celebrating yourself,” she continues, “So I think what’s important about this show is creating representation for people because once we see ourselves we can accept ourselves. And when we accept ourselves we can uplift others… so that’s what I want people to take from it.”