Once a magazine for art, The Feedback Club is now focusing on students pushing their ideas and pushing each other upward. 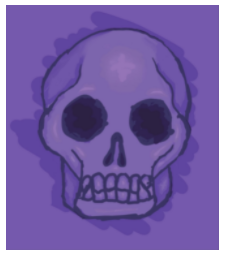 Artist credit: Alicia Torres A piece of art by a student in the club

Community and camaraderie are hard to find in highschool. For people who enjoy less mainstream forms of expression that form of collective vent can be hard to find. The Feedback Club represents a pillar for such people to show off their abilities and consummate with others who feel the same.

The Feedback club was originally an art & literature magazine before it was named as  such but as of (somewhat) recent under the new management of John Penola it’s changed to fit his style and the students’ ideas. Now the club is a space where students can show off their own art to peers and expand their skills.

Mr. Penola as the leading teacher for the club is a large contributor to this change, when asked about this change he said “Since I’ve taken over it’s really turned into a creative Arts club … a safe spot for all kinds of artists to create work and show off work they have made in and out of school.” He also discussed how the club has become looser and more accommodating to different people’s schedules. Mr. Penola said “As much as some students can fit art classes and school programs into their schedule, others can’t and it makes it harder to foster that love for the arts … at the beginning of the year I had so many students coming in saying I would love to go but I can’t fit it in to my schedule, if I was more strict and  specific there would just be less art and less creativity being fostered in this school, so now I set it up as who ever wants to come, show up, show up late, leave early, it’s a proverbial open door for art.”

Mr. Penola’s changes have opened doors of friendship and community for many students in KHS, including Junior Emily Ott who said “I’ve been doing Feedback Club since freshman year, I think it’s important because school, in general, doesn’t really give students a chance to share their personal talents and so this club allows for a comfortable environment where students can show their skills and ideas.” This is a running theme of members with Senior Alicia Torres saying “I think the greatest appeal of the club is being able to show off your artwork to a community for fellow artists without fear of harsh judgement.” That sort of connection is vital to tending a young artist’s growth.

As a unit the Feedback Club is all about working together. Maybe not for group projects or magazines, but instead to help each other build skills & confidence and really just help other people make art.