How the Rams accomplished victory on the NFL’s biggest stage

Screenshot of the results of Super Bowl XVI

The pads collided, and the line was pushed back. With no open receiver in sight, Joe Burrow was forced into a desperation flick of the ball. Once the ball hit the ground, the whistles were blue and the game concluded. The Los Angeles Rams were the champions of the world…or at least the Super Bowl LVI.

In the most highly anticipated game of the year, the Los Angeles Rams took down the Cincinnati Bengals 23-20. The Most Valuable Player award(MVP) went to wide receiver Cooper Kupp. It was a back and forth battle between the two teams. 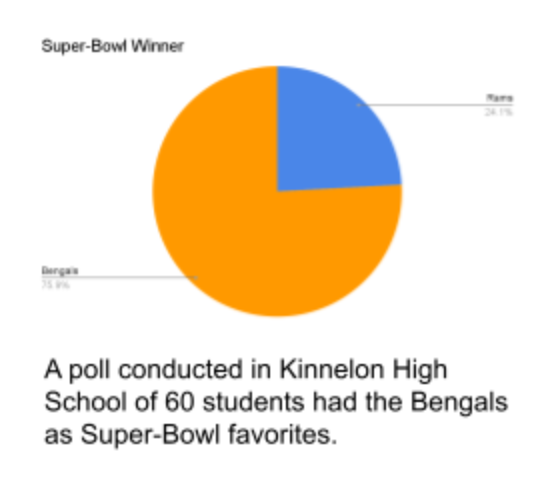 “I am happy that the Rams won,” says sophomore Evan Relovsky. “Stafford deserved that win after his time with Detroit. However, I would not have minded if Joe Burrow won.” The Bengals had a Cinderella story in the making. Having the third-worst odds to begin the season, it was remarkable that they made it there.

Anyone could see that quarterback Matthew Stafford was one of the reasons the Rams were able to take the victory. His experience and leadership helped control the Rams’ offense. Even when he threw an interception, he did not turn to habit and turned it around when it mattered.

The action-packed game led fans to lean over in their seats the whole time. Even though the Rams ground game was not up to par, they still were able to score when it mattered. With only 43 rushing yards, the Rams had to look for other ways to move the ball, which cost them towards the beginning of the second half.

“Aaron Donald was amazing on Sunday. He came to play when it mattered and made a big stop on the final defensive play of the game,” says sophomore Natalie Hoffman. “His post-game speech was very heartwarming and I am happy the Rams won.” Donald, one of the best defensive players in the NFL, had two sacks and four combined tackles. He even nearly made the sack to stop the Bengals comeback. It was an amazing play from a top player.

On the final drive, it was all Kupp who did the heavy lifting. Having four catches, thirty-nine yards, and catching the go-ahead- touchdown, he was by far the best player on the field. It was an unbelievable performance from arguably the best receiver in the NFL.

“I think that the refs played a contributing factor in the Rams’ success,” says sophomore Riley Macmanus. “Even though they missed some calls, in the biggest stage they should have been better.” It is understood that referees are people too and that they will make mistakes. When the game is on the line, it should be perfect officiating. This has left many wondering if there needs to be a change for next year.

The Super Bowl is always the best and most-watched game of the year. Even if the team that was wanted to win did not, it is an enjoyable game for all. Next up, is the offseason which is one of the best times of the year.