Climate Change: Terrorism of the past, action of the future

Climate change is a serious topic, but why is it that teens are the only ones taking a stand? 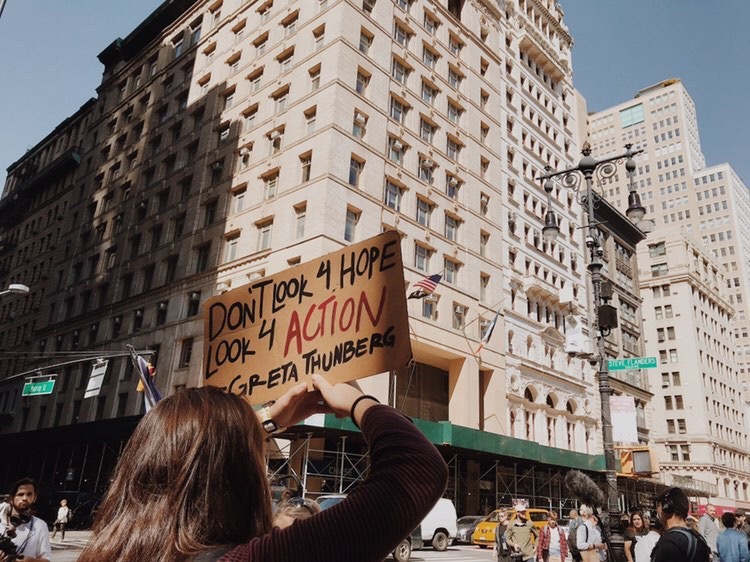 Gallery|5 Photos
Protesters of all ages were involved with the protests for awareness of climate change held on Sept. 20 and 27 in New York City.

On its last ozone layer, it lays hospitalized. The nurses and surgeons try doing everything they can possibly do to clean all the litter and gas emissions, to regrow its trees so it can breathe and function again, to regulate the temperature, but it’s too late. The last tree burns down to the ground, and all that goes through the mind of the doctors is that it’s too late to do anything now.

That time is now. We must stand up and fight for our planet. If we don’t do anything now, both our planet and us, its destroyers, will meet their inevitable demise. Nobody will be worrying over how Artificial Intelligence will take over jobs or how the economy might recede again; instead we will feel guilt and regret that we should have started to restore our planet back to a cleaner and healthier state earlier!

Over the past few weeks, you have probably heard more news about climate change and the action taken towards it as compared to the past decade or so. Why is this? It’s because the teens, who are also known as the “Future Generation,” have decided that it’s time to take action. We have accepted the reality that the climate is changing and can be potentially harmful to our futures, and are ready to act upon it to save our future. However, people don’t seem to be taking the opinions of teens as importantly as we want to or should be taken.

AZ: What was the experience like, and what did you learn from it?

NF: It was such a fun experience. Living in a small town like Kinnelon, we’re not always exposed to different mindsets, beliefs, and values, so going to the climate strike in the city was really eye-opening. I met a lot of really awesome people, both younger and older than me, who were so genuinely passionate about making a change in society. It was really inspiring to be a part of!

AZ: What inspired you to participate?

NF: I actually missed the big climate strike in the city on Sept. 20, but I went to the smaller one held on the 27th. Climate change and being environmentally friendly has always been something I’ve been really passionate about. Whether it’s using a reusable straw or getting my family to stop buying plastic bottles, I feel that every little thing that I can do helps in one way or another, so I decided to go to the strike to continue that. It’s a cause I believe in and want to support and will continue to do so.

Greta Thunberg, one of the most popular young climate activists, and Lilly Platt, a young girl who raised awareness for the burning of the Amazon rainforest, are just two examples of how teens are mistreated and disrespected, despite doing their best to bring awareness to issues regarding climate change.

When Platt expressed her feelings about the Amazon forest fire on Twitter, many people praised her, followed her, and reposted her tweets, helping her raise awareness as she intended to. However, those weren’t the only responses she received.

The 11-year-old also received inappropriate direct messages and was targeted by trolls. Thunberg also received disrespectful comments and responses towards her speeches, according to BuzzfeedNews.com. The first was from Canadian politician Maxine Bernier, stating that, “She should be denounced and attacked.” She received another hateful comment via Fox News by a guest, who called her “mentally ill.” This statement was not just made toward her speech but also targeted her medically diagnosed condition, Aspergers.

Such comments directed towards the younger generation who are simply trying to restore the Earth to a stable state shows just how often people take time to consider the consequences of their actions and the way it affects the quality of life for future generations.

In addition to the comments, political decisions also represent how unbothered politicians are toward the wellbeing of future generations. Since Trump was elected President, America has strengthened the fossil fuel industry, just like he vowed to do in his campaign; this is because his primary goal is to “make America energy dominant and protect jobs.” Therefore, anything of economic value attracts him, no matter how much darkness it may create in the future.

Both Trump and his actions pose a major threat to climate change movements.   Trump repealed Obama’s clean power plan, and he withdrew from the Paris climate agreement, making America one of the three countries to do so (along with Syria and Nicaragua). Moreover, all these actions and campaigns lead to America breaking a record in 2018, making America the biggest producer of oil and natural gas in the world.

There are many routes Trump could take in order to provide his voters and followers what he promised without creating such a disaster for future generations. According to usatoday.com, a more economically valuable route is renewable energy from naturally replenishing sources, and current investors are making a lot of money off of it because clean energy revenue, investment, and usage are all on the rise.

President Trump has a way out of the disaster he is creating; however he won’t take it and is instead blinding himself to the negative impact his actions are really creating, knowing he will not be alive when the effects of climate change hit society.

On Sept. 20,  many countries around the globe protested for climate change, demanding action to be taken. The protest was lead by Switzerland’s Thunberg. Many of the protesters from the event were young teenagers and kids, expressing their frustration towards the situation they will have to deal with, as they held posters with statements such as “You’ll die of old age! We’ll die of Climate Change!”

Politicians and the older generation in the present day will not have to deal with what kids in their teens will have to deal with, but they are still in charge of situations that OUR future depends on. This raises the question: Should there be some form of underage representation in the government?