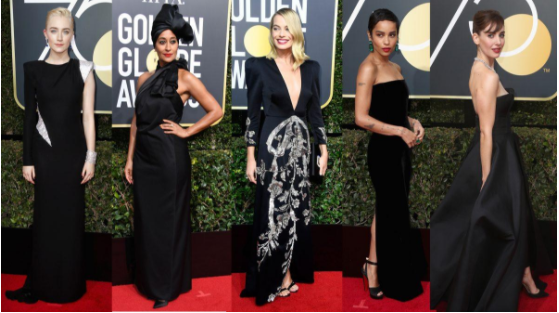 The Epidemic of Sexual Harassment

Editor’s Note: The following is an opinion-editorial. The views expressed in this article do not reflect the views of the Colt Chronicle staff, Kinnelon High School or the Kinnelon community.

Celebrities in previous years may have worn blue, red, or purple, but this year, the red carpet at the Golden Globes was dominated by one particular color: black. Hundreds of Hollywood celebrities sported black dresses or suits with the addition of a pin that read two simple, yet powerful words: Time’s Up.

While this hashtag may have attracted a national following at the Golden Globes, its origin has much deeper roots. In October of 2017, following the news of Hollywood director Harvey Weinstein’s sexual assault allegations, millions of women started using the hashtag “me too,” a precursor to #timesup.

The popularity of #metoo spread across all forms of social media, making headlines across screens. These two words might be small, but unfortunately, the amount of women who have shared them is far from it. Hundreds of thousands of women posted this hashtag to Twitter or Facebook to show just how common sexual harassment is in society. This hashtag may come from an injustice, but the unity of the women around the world who have experienced this form of abuse are here, and they are ready to make their voices heard.

The shattering number of women participating in the #metoo movement inspired members of Hollywood to start a movement of their own, the #timesup movement, which was debuted at the Golden Globes. While #metoo gave women a chance to see that they have not suffered alone, #timesup demands change. #Timesup demands action. #Timesup makes it clear that sexual harassment will no longer be tolerated, overlooked, or covered up.

Just how common is sexual harassment? According to End Sexual Violence, a website dedicated to ending sexual assault, one in four women and one in six men will experience sexual harassment in their lives. Statistica also conducted a recent survey, showing that 60 percent of women have been sexually harassed in the United States. Even more concerning is the fact that many cases of sexual assault often go unreported. These numbers are frightening, and these two new movements have made it clear that a change is needed.

Furthermore, sexual harassment statistics are equally alarming for teen victims. According to Teen Help, teenagers between the ages of 16 and 19 are 3.5 times more likely than the general public to be victims of sexual abuse. These victims are a diverse group of males, females, and transgender adolescents. Also, one in nine girls under the age of 18 experiences sexual abuse at the hands of an adult. According to Rainn.org, eighty-two percent of all victims under the age of 18 are female. Sexual harassment knows no boundaries, and time is up for this to end.

So here is the big question asked by many skeptics of these new movements: Why now? Why are millions of women coming forward now to share their unfortunate stories? The answer is simple: unity. The #metoo and #timesup  movements have helped both women and men realize that they are not alone, that they should not feel guilty about what happened, and that they are survivors.

Take Larry Nassar, the Olympic doctor for the U.S. Gymnastics team, for example. He was first reported for sexual abuse over 15 years ago, but the girls were ignored, called naive, and blamed for the events that happened. Now, the survivors have banded together into an army of over 100 powerful women to share their stories and use their collective strength to stand up to their attacker. These movements and stories have shown and will continue to show how unity is the driving force behind confronting and stopping an injustice.

Senior Lauren Krauskopf offered her words on these two new movements: “I think these movements need to be talked about because in the past, they were viewed as ‘taboo’ topics. However, these topics are extremely important and we need to start the conversation, which is what these two movements are doing.”

In his effort to take advantage of women, Harvey Weinstein actually did the opposite, making women an unstoppable force. Because of his horrendous acts, he opened the floodgates for millions of men and women to unite against injustice, fight to change sexual harassment, and ensure that the words #metoo will never be trending on social media again. Time’s up on silence. Time’s up on waiting. Time’s up on sexual harassment and discrimination.